Good luck to the bid of Risa to bag a seat in the Senate! 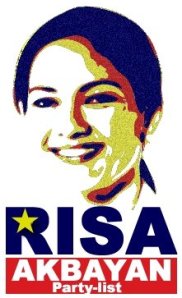 From champion to goat

What a difference a year make. From last year’s champion to today’s goat.

I really feel sorry for Filipino golfer Juvic Pagunsan. He had a brilliant birdie and eagle finish last year for a -19 to win the inaugural Pertamina Indonesia President Invitational. Today, he had a disappointing four bogeys and a double bogey in his last nine holes for a +6 final round and winded up almost at the bottom.

Australian Scott Hend came from behind as the 3rd round leaders faltered in the closing holes. Hend, who missed the cut in the Philippine Open last year, had a final 66 for -16 total to win the Indonesian championship.

Mars Pucay salvaged pride for the Philippines by finishing in tie for third, four strokes behind.

Indeed, what a difference a year make.

The same may be said – from champions to goats – of last year’s so-called “heroes,” Jun Lozada and Joey de Venecia.

Lozada has again snitched on his friends. This time turning his back on the Black & White Movement (see post below).

And Joey … oh my gush … he’s eyeing to run in 2010. He might as well write a book on crying over spilt milk in losing a bidding or how not to tell all in whistle blowing.

The latest Pulse Asia survey on the 2010 presidential derby once again highlighted the need for the opposition to unite and field a common candidate.

Of ten presidentiables included in the survey, 7 are identified with the opposition. Their combined preference rating is an overwhelming 71 percent. The 3 pro-administration bets have a combined rating of only 23.2 percent, although the whole pack was led by frontrunner VP Noli de Castro.

I share the optimism of former president Erap Estrada that the administration would “eat the dust” of the opposition in 2010. However, I also worry that next year’s gargantuan P1.4 Trillion budget would be used by the administration to ensure a victory, deserving or not, for GMA’s successor.

I heard former president Fidel Ramos assuring the nation after the SONA last Monday that GMA would end her term – as well as “her immunity” – in 2010. That is pregnant with meaning. Was Ramos’ delivering a veiled message to the current Palace occupant to ensure a friendly successor in 2010 or was he giving the opposition counsel to run after GMA once she loses her immunity when she steps out of Malacanang?

I am certain that GMA, by hook or by crook, would ensure the administration’s victory in 2010 to save her own skin. Hence, the need for the opposition to galvanize under a single flag to thwart the expected massive vote-buying and cheating in 2010. They may be able to fool all the people some of the time, and some of the people all the time, but they certainly cannot fool all the people all the time. It would be foolish for the administration to rig a 70-23 percent margin if the opposition is united.

Already the second-longest resident of the Palace by the Pasig after the dictator Ferdinand Marcos, GMA is not about to leave just yet. She would want to ensure that her rule would continue beyond 2010 either via a puppet in Malacanang or herself pa rin via charter change. Yup, we should all watch out for the administration moves to revive term extension via amendments to the Constitution. Malacanang is exploiting the peace process in Mindanao as its key to unlock charter change.

Of course, this is not the change that we need. What we need in this country is character change.

Barack Obama’s highly popular “Change. Yes we can!” campaign has reached the Philippine shores. The Ateneo School of Government appears to have borrowed from it in launching its Kaya Natin! Movement. It is an attempt for reforms through exemplary models of ethical leadership and good governance in four local government officials, namely, Ramos Magsaysay awardees Mayor Jesse Robredo of Naga and Governor Grace Padaca of Isabela; Governor Ed Panlilio of Pampanga, and Mayor Sonia Lorenzo of San Isidro, Nueva Ecija.

The movement is targeting the youth, just like Obama, is this crusade to create “Islands of hope.” It has launched a campus tour for the four outstanding local officials. I look forward to their visit to Davao to lend my support.

Presidential wannabes have become a dime a dozen with the on-going Pinoy style primaries.

Impressive list? Hohum, our mayor sees no one among them winning his vote. He says he might declare Davao an “open city” in 2010.

In the US, they trim down the wannabes by the state caucuses and primaries. Here, veteran kingmaker Manong Ernie sees money as the ultimate eliminator.

With a required war chest of about P3-5 billion, he estimates only four have the financial capacity to wage a decent, and might not not even be a winnable, campaign.

Elections are clearly a money game.