Jakarta was named in a study as the “most vulnerable” to climate change in southeast Asia.

Metro Manila ranked 7th in the list of hot spots.

Southern Mindanao or the Davao Region was 103rd among 341 districts surveyed in 7 countries in the region.

But this is not a reason to celebrate even if Davao ranked low among the hot spots.

We need to care for the environment and help fight climate change.

Big bang on May 9 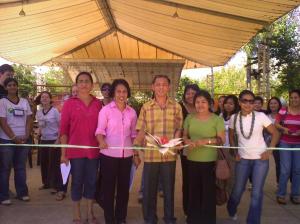 Local fair trade advocates opened a mini-fair at the Matina Town Square yesterday to prepare for the big bang on May 9 to mark the World Fair Trade Day.

Activities for the mini-fair includes a forum, product exhibits and demonstrations and an evening concert.

Thanks to Katakus, an award-winning micro-enterprise NGO and volunteers of the UK-Philippines Global Xchange for organizing the mini-fair.

Join the big bang on May 9 by beating drums against poverty, against the global economic crisis and against climate change.

One down, 2 shouldn’t go

Hedcor has decided to scrap one of three hydro power plants it intends to build in Marilog District due to delays in the project.

Rene Ronquillo, president of the Aboitiz “cleanergy” firm was quoted by the Philippine Star saying its board has decided to scrap the Suawan plant, part of the 34.5 megawatt Tamugan-Panigan-Suawan hydropower project estimated to cost P7 billion. The Suawan plant has a capacity of 7 mw.

The reason for the delay is the opposition of the local water utility, Davao City Water District. The delay is already two years. For us lay people, the dispute is easily resolvable as it pertains mainly on elevation, where water would be tapped by either Hedcor or DCWD, and not on a fundamental issue on the use or misuse of water resources. Technical solutions can certainly fix the problem and both parties have plenty of good engineers.

Further delays in the plans to build the hydro electric facilities to meet local energy shortage by 2010 might altogether scrap the two remaining plants. God forbid.

If the water utility continues to dilly dally, as I have shown in Septage the post below, here’s what I see in the future. Two years down the road, the water district will have to fend off two public anger – poor water service and the dreaded brownouts. Yup, I would squarely put the blame on DCWD if the city suffer from power shortages starting in 2010.

Thank God, the internet service in our house was back yesterday afternoon.

The Philippine Sanitation Alliance will hold a seminar-workshop today on “Developing a Comprehensive Program for Septage Management in Davao City.” The program is organized by the Davao City Water District with fund support from the USAID.

Septage? Check this entry at wikipedia.

About a decade ago, the water utility firm was also a recipient of fund support from foreign aid agencies on the sewerage system for the city. Nothing, unfortunately, came out of it. The same can be said of its plans for the Tamugan River as source of surface water. The National Water Resource Board granted it permit ten years ago, but nothing has been done about it.

I’m attending this seminar today but I’m crossing my fingers where it would lead us to … given the track record of DCWD, which is long on plans but short on action.

The Malacanang occupant has been bitten by the pink bug of Bayani Fernando, Metro Manila’s czar who has painted the metropolis with pink colors for his beautification drive.

Short on good things to say on her State-of-the-Nation Address (SONA) today, GMA would highlight the event instead by what she would be wearing for the joint opening of Congress.

The SONA has long been a fashion show for the rich, the famous and the mighty. But this time it would be more than just a cat walk on the corridors of power. The pink gown of the Palace resident would appear to be the main feature of the SONA – State of the Nation, A dress. Philippine media is abuzz with it noticeably turning broadsheets into fashion mags.

This is how my friend Jess Dureza, now the Press Secretary, justified why GMA is wearing such a pink gown:

The President wants to capture the theme of her SONA—the Filipino’s self reliance, care for the environment, concern for the poor and vulnerable as well as the country’s stability as a nation to become a First-World country.

On Second thought, bar her height I believe GMA could indeed be a fashion star. In fact, in the league of Naomi Campbell – famous models with attitude. (Foto credits – kaypoh.com and born-today.com)

GMA’s address is reported by the Philippine Star “to offer hope” to the suffering Filipino people. Did I correctly read it right, HOPE?

Almost every SONA, colleagues in the media ask for my assessment. Here’s a preview: for Jess Dureza – I give 100 %; for Speaker Prospero Nograles, who will introduce GMA along with the Senate President – for such a simple ceremonial task – 95%; finally for GMA – hmmm … Abangan!

It is said that the next major world conflict or future wars will be about water.

Well, actually one is already raging in our city. But thank God, this war uses no bullets or bombs.

The war pits the government-owned water utility, the Davao City Water District, against the privately-owned clean energy firm Hedcor. DCWD wants to tap the surface water of the Tamugan River for its future supply; Hedcor wants to use the same river to generate hydropower to answer the expected power supply shortage by 2010-11.

A number of battlefronts have been opened in their war over the Tamugan and other rivers in Marilog District, some 50 kilometers northwest of the city.

Front 1 – among the indigenous peoples in nine affected barangays (villages). Hedcor has undertaken community prep work to win over the IP communities; – Hedcor has the upperhand;

Front 2 – at the National Water Resources Board (NWRB) in Manila which grants permit for water use. DCWD was granted permit for Tamugan as early as 10 years ago but has not done any concrete project to tap surface water. DCWD is currently extracting almost 100 percent of its supply from underground water like in Dumoy. Hedcor has a pending application; DCWD has the upperhand;

Front 3 – Environmental Management Bureau (EMB) which grants environmental permits; EMB has put the application of Hedcor for ECC on hold; – DCWD has the upperhand

Front 5 – media – both have their PR campaigns; However, DCWD is embroiled in a number of controversial issues such as poor service, non-payment of taxes, and alleged agency corruption; due to skyrocketing cost of fossil fuel and climate change, many people seek clean alternative energy; Hedcor has the upperhand;

Front 6 – you! – the people, the ultimate consumer of both water and power.

Which side are you in favor?

Or are you like me who believes that they can co-exist?

Your views are valuable, as in the case of the many comments on our Ayala Center Davao post. Please send them and be part of the water war.

Aside from household reusable wastes, over 30 firms in the city sold their scrap to 10 recyclers as part of the city’s and the chamber’s solid waste management program to turn trash into cash.